skip to main | skip to sidebar

Aloha Everyone! If you’re looking for that special place to bring your kid to school, you don’t have to look any further. Hawaii has given you and your child a place to feel comfortable when it comes to getting a proper and fun education. is known for its natural beauty, its history and its overall friendliness. What better name for a school? , as it was appropriately named, is well-recognized for its new beauty, its accomplishments in history and its genuine friendliness, generosity, and companionship. It is among the top schools in the district of Honolulu and has won numerous awards for its academic skill and leadership.
(Pictured Above: Maui High School - Home of the Tikis - Honolulu, Hawaii)

was named after the demigod , who, in Hawaiian mythology, was said to have pulled up from the bottom of the ocean. Legends tell of how he went fishing with his brothers and accidentally caught his hook on the ocean floor, thus raising the islan

ds of to earth’s surface. Maui's evident impact on Hawaii is portrayed through the High School. Maui High has had and continues to have a great impact on the students of

Looking far back into the history of The Aloha State, the beginning of Hawaii began with the Polynesians. The Polynesian people make up 16% of the population and is the top populating group of Honolulu and the rest of Hawaii. A majority of Polynesians, if not all, believe that Tiki was the first living man . It is also believed, according to Polynesian mythology, that Tiki is a sculpture carved in the shape of a god that houses a spirit. We at Maui High School believe in sportsmanship and high levels of school spirit. In the way of the Tikis, we can bring the ancient spirits into the doors of our school and show Honolulu's rivals what we're really made of! 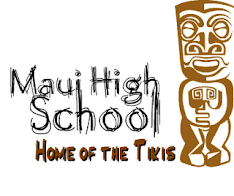 Honolulu - the home of our school